20 Apr Bullshit: A new form of propaganda in the digital age

Posted at 01:26h in articles by janice 0 Comments
0 Likes
Share

Abstract: Propaganda is traditionally considered the use of emotionally provocative imagery to distort facts to a relatively wide target audience such as a nation. Today one sees propaganda in the workplace and notably it comes in the form of distorted facts and biased interpretations of data. In this article I suggest the ease of data collection emerging from the IT revolution and a lack of control on its use has led to the widespread implementation of this novel form of propaganda.  This new form of propaganda is distinct firstly, because it masquerades as hard fact. Secondly because it is often created much more locally, in the everyday work place such as schools, hospitals, local retail outlets and even, Universities.

Here I define this novel form of propaganda so it can be called out when seen in any sector. I propose that this form of propaganda be defined as Biased, Unverifiable, Lax Logical Substantiation of Hegemonic Ideological Truths (BULLSHIT).

Introduction: Have you ever sat and watched a senior manager trot off a bunch of ‘statistics’ that runs contrary to the reality you and your colleague’s experience daily? “Bullshit”, you murmur under your breath.  Bullshit has been experienced by workers in diverse workplaces, from small coffee shops to multinationals. Perhaps this is unsurprising in market driven sectors. However, bullshit is found in institutions such as the NHS and police force and perversely, even our Universities begin to practice bullshit. Institutions we rely on to teach our kids how to see through bullshit are beginning to actually peddle it. According to the “Guardian University Guide,” Surrey University is the 4th best in the country. There are without doubt many brilliant staff at Surrey University. Only they can know to what degree that value is representative of truth and to what degree it represents a brilliant marketing strategy and playing of league tables. I have sat and watched the likeable Surrey Vice Chancellor, Sir Snowden (pictured) speak. I thank him for being the inspiration for this treatise on bullshit. 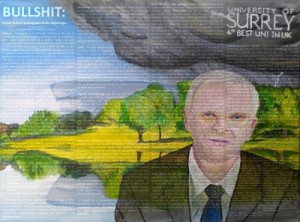 This man matters because he is also the President of “Universities UK” and the corporate, management led, marketing ideology he has peddled and encourages is destroying British Universities.

Biased: The epistemic model of propaganda (Tuttle Ross, 2002) requires four conditions to be satisfied for a message to be considered ‘propaganda’.

Unverifiable: What is particularly novel and specific to this form of propaganda is that it may be consequential of the large increases in data that technology now enables leaders to collect. Due to ease of collection this enables large data collection in relatively small bureaucracies and hierarchies. This data provides additional power to leaders that have ‘functional access’ to the data. Functional access signifies having sufficient permission, time and resources to analyse the data so as to utilize the data in a timely critical discourse. This means that data is often functionally unverifiable to workers due to resource limitations even if data can be claimed as ‘open’.

Laxity: The data enables leaders to create the semblance of credibility based on supposed ‘facts’ and to obfuscate reality.  Given the dearth of data and ease of obtaining more data, leaders have the opportunity to select data that supports their arguments. It is also easy to design and create new data capture tools to generate the ‘evidence’ they need. Because data is unverifiable, leader’s analysis need not be comprehensive and rigorous, it can be lax, it could also be just plain false. I think it is important to recognize that this may well not be the fault of the propagandist. We live in an age where data is ‘expected’ and failure to deliver unacceptable. The laxity of analysis is as likely due to time pressure as it is to the support of pre-conceived decisions and arguments.

Logically Substantiating: Typically the form of propaganda and discourse I am defining is aimed at workers by senior managers not politicians. The senior manager’s role includes the processing and interpretation of such data for their own decision making. Clearly not all use of data is for obfuscation and propaganda purposes and it is often very well analysed and delivered. This article is specifying a particular discursive use of data. This article is not suggesting we should oppose collection and analysis of data. Yet analysing and interpreting data is a high level skill and avoiding experimental and cognitive bias is difficult even for trained researchers. Data designed or selected to support an argument or decision is by its very nature a method to logically substantiate a pre-existing decision or idea.

Hegemonic Ideological Truths: Leaders manage a spectrum of complex issues, not limited to financial pressures, personal motives, organizational issues and politics within their institution. It would be incorrect to characterize leaders as inherently uncaring towards their workers. However it is leader’s culture and sets of beliefs about economics and social behaviour which dictate the culture and environment of their employees. Based on social dominance theory (Sidanius & Pratto, 1999) hegemony is exacerbated in steeper hierarchies and therefore one may predict increased bullshit in such environments. Clearly a set of beliefs, neo-liberal or otherwise are ideologies. The key point this article makes is that in a data rich environment where data is ‘selected’ or ‘created’ to provide arguments rather than to illuminate facts the outcome is propaganda. The data is being used to substantiate “truths” as the speaker wishes them to be shaped and formulated by their beliefs and culture, not objective truths.

I suggest the IT revolution has delivered a novel tool for propaganda to an increasingly local level in the labour environment. I term this propaganda as Biased, Unverifiable, Lax Logical Substantiation of Hegemonic Ideological Truths (bullshit).

BULLSHIT as an appropriate acronym: An academic criticism could be levelled that the description has been written to fit the acronym rather than generating an acronym to fit the description. This criticism would miss the point of a good acronym being a good meme that encapsulates the internal meaning. If someone has a stroke you are told to act F.A.S.T (to help you to check the Face, Arms, Speech and call an ambulance in Time).  The urban dictionary describes ‘bullshit’ as “A blatant lie, a fragrant untruth, an obvious fallacy” (“Urban Dictionary: bullshit,” n.d.). This top voted definition contains humour and the word ‘bullshit’ has always a touch of humour, it is not an aggressive term in and of itself. Academic work has focused on the semantics of ‘bullshit’ before (Frankfurt, 1988) in the context of communication in which a ‘bullshitter’ is described as someone who, “does not care whether the things he says describe reality correctly. He just picks them out, or makes them up, to suit his purpose.” It seems appropriate to legitimize a pre-existing term with formal recognition rather than create a new one. Also one hopes that through the medium of humour one can empower workers and leaders to have more frank discussions. The nomenclature is aimed at providing a means to discuss and constructively criticize rather than insult and derogate. The term brings the idea back to earth and is an exercise in utilizing working class common speech into academic discourse rather than excluding it.

Why do leaders practice bullshit? Folger & Skarliki (2001) provide potential rationales for why leaders may practice this form of bullshit propaganda. In situations where leaders consider themselves blameworthy of errors of judgement the threat of being criticized by those that hold them to account can be perceived as aversive. Studies where blame is manipulated show that managers spend less time with victims of their decision when they are to blame than when they are blameless (Folger & Skarlicki, 1998). Additionally, leaders seek to avoid actions which may consequentially elicit questions regarding their prior decisions. This may be due to the new outcomes increasing their own ideological cognitive dissonance and being avoided (Festinger, 1962). Or it may be due to a reluctance to transmit bad news known as the MUM effect (Tesser & Rosen, 1975). The increased ability to substantiate ideological truths combined with a natural reluctance to face the impact of bad decisions there is increased risk of management turning ‘toxic’. The term ‘toxic leadership’ originates from military research (Reed & Army, 2003) and describes leaders who lead by fear, bullying and general all around nastiness. Interestingly, this results in a ‘toxic triangle, where such toxic leaders, the people being led and the environment which makes that happen all have a part to play (Padilla, Hogan, & Kaiser, 2007).

DATA misuse in 21st Century: Paul Hoggett (Hoggett, 2010) examined the ‘targets and indicators’ culture in the NHS and concluded that the data generated in this environment acted as a ‘thick skin’ to separate government from reality. This he specified as a ‘perverse social defence’. Here we identify an alternative perverse utilization of data as derived by the IT revolution. In this case data is used to defend decisions that reside within the prevailing hegemonic ideological ‘truths’ of senior decision makers. It is important to label and characterize such propaganda and processes so as to have the language to argue for legitimate debate and criticism of social structures as they develop.

Countering bullshit: Bullshit could be economically counter-productive as it likely facilitates bad decision taking. It is often utilized to maintain aa status-quo in the face of negative feedback. In work environments with powerful, entrenched hegemon and a strong hierarchical internal structure this is particularly the case. Such political situations cow dissent and dismiss criticism without self-reflection and may particularly suffer from high levels of bullshit.  Yet it would be facile to simply criticize leaders and hold them responsible. Those being led have a part to play too, we all use bullshit sometimes and perhaps we are all too compliant in allowing it to take hold within our institutions. Just as in toxic work environments everyone has a part to play, in a high bullshit environment it is up to all of us to act by

1) Speaking up and labelling bullshit when we see it.

2) Giving more time for proper analysis so that leaders and staff are not forced to deliver bullshit.

3) Do not always expect analysis by default, allow heuristic best guesses and opinion when appropriate.

4) Always ask the question: “Is this analysis ‘supporting a preconceived idea’ or is it really illuminating the subject under discussion?”

Senior management’s responsibility is to ensure that a healthy, non-threatening environment exists so that staff can do that and to lead by example.

Conclusion: The availability and ease of collecting data as a consequence of the IT revolution has led to data on some occasions being selected and created for the purpose of supporting arguments rather than adding value to decision making processes. A data rich society has led to a new form of propaganda relying on apparently supportive ‘data’ rather than ‘emotional responses’ to substantiate pre-conceived beliefs.

Frankfurt (1988).  On Bullshit: The importance of what we care about: Philosophical Essays. Cambridge: Cambridge University Press, 1988.